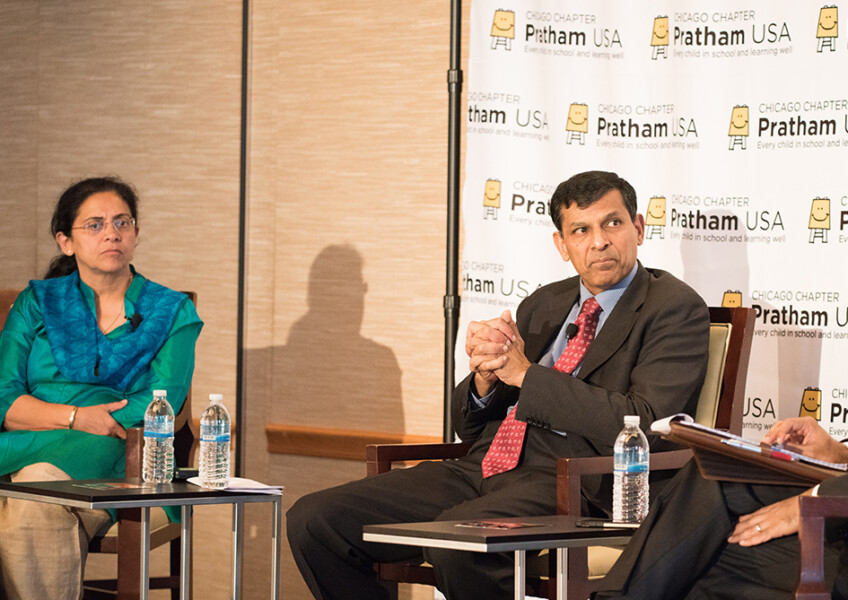 On Monday, May 21, Pratham Chicago hosted an evening of in-depth conversation between renowned economist Dr. Raghuram Rajan, who is the Katherine Dusak Miller Distinguished Service Professor of Finance at the University of Chicago Booth School of Business, and Pratham CEO Dr. Rukmini Banerji, a former Rhodes scholar and University of Chicago alumna.

The event, held at the Mid America Club in downtown Chicago, focused on a simple yet all-important question: Will India fulfill its potential? After an introduction by the night’s moderator, Wall Street Journal columnist Sadanand Dhume, the lively discussion quickly got underway.

Dr. Banerji stressed the importance of early education for the future of India. The new generation, she noted, is “energized” and has “the ability to change the world,” but added that “unless you build the foundation of a building, you cannot build any higher floors.” Although India’s illiteracy crisis is enormous, she optimistically noted that it is not an “incurable disease.” “If a child cannot read in grade 8,” she argued, “why not just go ahead and teach them how to read!”

Dr. Rajan called attention to the disconnect between the jobs produced by a global economy and the skills possessed by India’s youth. In an insightful comparison between India and China, he cited three key advantages for China:

– It became an open economy 12 years ahead of India,
– It has placed more emphasis on early education and
– Its authoritarian form of government has allowed for quicker progress than India’s democratic system.

However, Rajan noted that precisely this democracy would help India in its next stage of development, offering youth “space to explore, room to debate.”

The two speakers approached the topic from different perspectives based on their areas of expertise, but the overall message was clear: India can fulfill its potential if the youth are given a quality education and the skills necessary to be able to take the country to the next level.

The evening, sponsored by Accenture, provided Pratham supporters an opportunity to interact with two eminent experts and hear firsthand from them what the future holds for India.  Watch the full conversation.