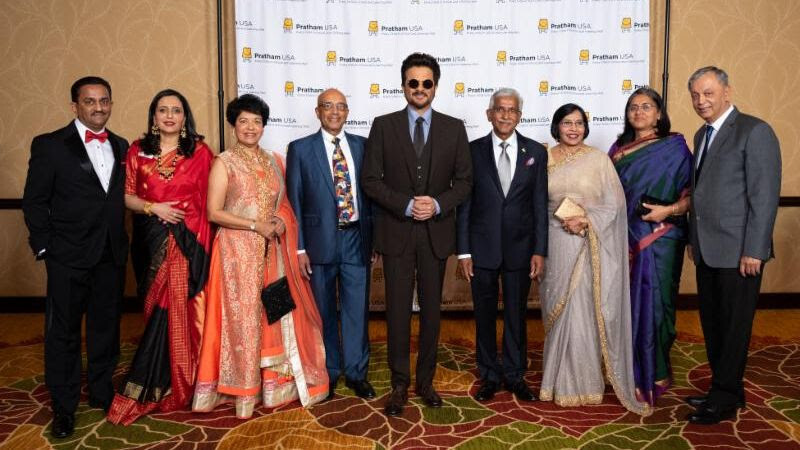 On Saturday, April 20, 2019, more than 900 guests attended the annual Houston gala, which commemorated 20 years of Pratham’s presence in the US. Held at the Hilton Americas, the event raised $4.5 million—the largest amount ever by a local Indian-American charity—to support our education programs.

The enormous impact we’ve made on the education sector in India was reflected in the evening’s program. A touching video tribute to gala honoree Vijay Goradia, who established Pratham USA in 1999 after visiting a small preschool in the slums of Mumbai, was followed by an insightful conversation between Goradia and Pratham co-founder and president Dr. Madhav Chavan, a former University of Houston professor.

“Like I would bet on an established company over a startup, by investing in an NGO like Pratham, I am investing in the future of tens of millions of children,” explained Goradia, who pledged $1 million at the benefit. “It has a proven track record, continues to be well managed and grow.”

Local luminaries and gala underwriters Bimla and Swatantra Jain, who were also recognized for their longstanding commitment to education, made a commitment of $1 million to support the construction of a vocational training center in North India.

“This is our city’s 20th annual gala, and every year we see an increase in participation and enthusiasm for Pratham’s innovative programs,” said chapter president Asha Dhume. “Many people are astounded to learn about India’s learning crisis and inspired with how Pratham is working to address it.”

Celebrity guest Anil Kapoor was visibly moved by the tremendous show of support. “It’s a privilege, it’s an honor, it’s an emotional moment for me to be here listening, observing, absorbing emotionally the kind of work Pratham has done for 20 years!” exclaimed the Bollywood superstar. “I’m feeling really very small compared to all of you and all the people who have done so much for such a noble cause and for such a great organization. It proves that Pratham is one of the world’s best organizations.”

“It’s an easy sell,” explained Joe Patterson, senior vice president of Bank of America, who has been part of the Pratham family for close to two decades. “The efficiency of what Pratham does for really small dollars, what it can achieve in these villages and the way it pulls together the Houston community is very powerful.”

Among the many prominent community leaders and philanthropists in attendance were Dr. Anupam Ray (consul general of India), Raja Krishnamoorthi (Illinois congressman), Andrea and Bill White (former mayor of Houston), and Anne and Albert Chao.

The event, hosted by mistress of ceremonies Nicole O’Brian Lassiter, featured an inspirational speech from Ali Dhanani, who supports a Pratham vocational training center in Hyderabad; a heartfelt message from Pratham beneficiary Mamta Dawar; and lively entertainment from the dance group Rhythm India as well as a fashion show by leading Indian designer Anita Dongre presented by Raaz.

The evening’s success would not have been possible without the tireless efforts of gala co-chairs Peggy and Avinash Ahuja, Indrani and Hemant Goradia, and Shital and Bhavesh Patel and the generous support of sponsors, including Wells Fargo, Ascend Performance Materials, Packwell, Amegy Bank of Texas, Bank of America, Merrill Lynch, Fidelity Family Office Services, and PKF of Texas, all of which have been supporting Pratham’s transformative work for a decade.

Read more about Vijay Goradia’s charitable work in the Houston Chronicle and view more photos from the event here.