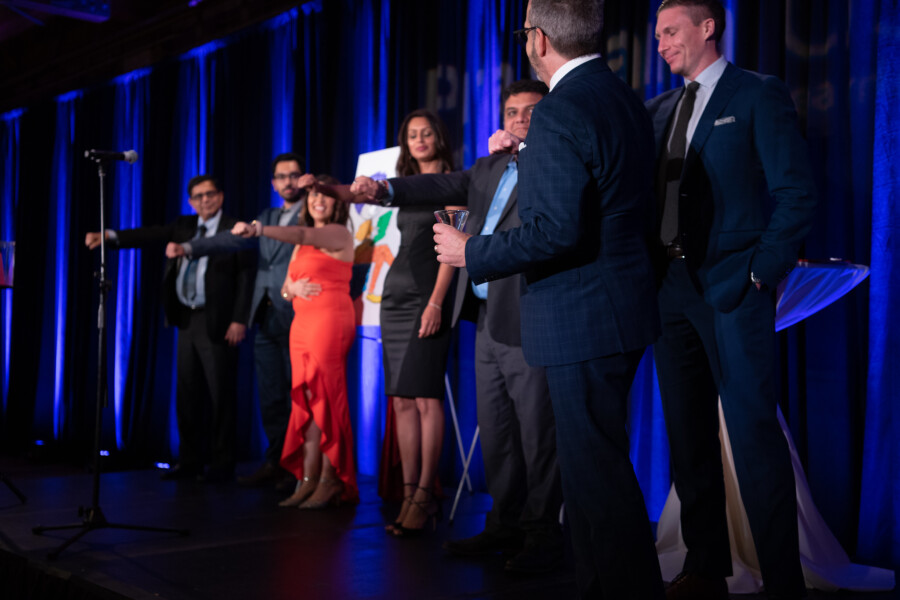 On September 28, 2019, more than 350 Pratham supporters gathered at Rockwell on the River for the annual Chicago chapter gala. Guests took advantage of the beautiful weather and enjoyed sweeping views from the spacious deck overlooking the North Branch of the Chicago River.

During the cocktail hour, a virtual reality exhibit allowed participants to experience a typical village where Pratham works. Chicago teens who had spent two weeks during the summer interning in India as part of the Youth Leaders Program were also on hand to answer questions.

The evening’s program commenced with a video message from Punit Renjen, chief executive officer of Deloitte Global and creator of WorldClass, Deloitte’s global CSR initiative to help 50 million people succeed in the new economy through education, skills development and access to opportunity. Renjen praised Pratham–one of two charities chosen by Deloitte to help realize its vision in India–in particular for its focus on women’s education. “I believe it is our responsibility to be a force of good in the world,” he declared. “When women and girls are educated, they lift entire families out of poverty.”

During the welcome remarks, chapter president Joher Akolawala spoke about sharing a collective responsibility to help those less fortunate than ourselves. “Philanthropy requires resources, but selfless giving is a mindset,” he explained. “Education denied to one of us, is education denied to all of us.”

Devyani Pershad, head of International Collaborations at Pratham, introduced attendees to twin sisters Anjali and Anchal Purabiya, both graduates of our Second Chance program. In a Q&A, the girls, who are competitive athletes, shared their story of returning to school and pursuing their dreams of one day competing in the Olympics. In her remarks, Devyani stressed the importance of early education: “Getting children the chance for a right start is much more effective than trying to catch up later.”

A live auction allowed guests to support Pratham by bidding on a variety of impressive items, including paintings by Sandeep Mani and a zip line package. The evening’s entertainer, mentalist and magician Brett Barry, captivated audience members.“We selected Brett because he was not like anything we had done before.” said chapter manager Archita Singh. “He showcased a great form of psychological entertainment which was not run of the mill and the audience were very pleasantly surprised and extremely engaged in the act.”

The event was broadcast live via Facebook giving supporters a chance to address a larger audience. Longtime supporter Roshan Shankar discussed what has kept him involved for twelve years. “What attracted me was the scale at which Pratham operates,” he recalled. “It is really difficult to replicate success in a country the size of India. As an engineer myself, I respect the way data is meticulously kept, evaluated, and utilized to make sure the programs are having the greatest impact and continue to innovate.”