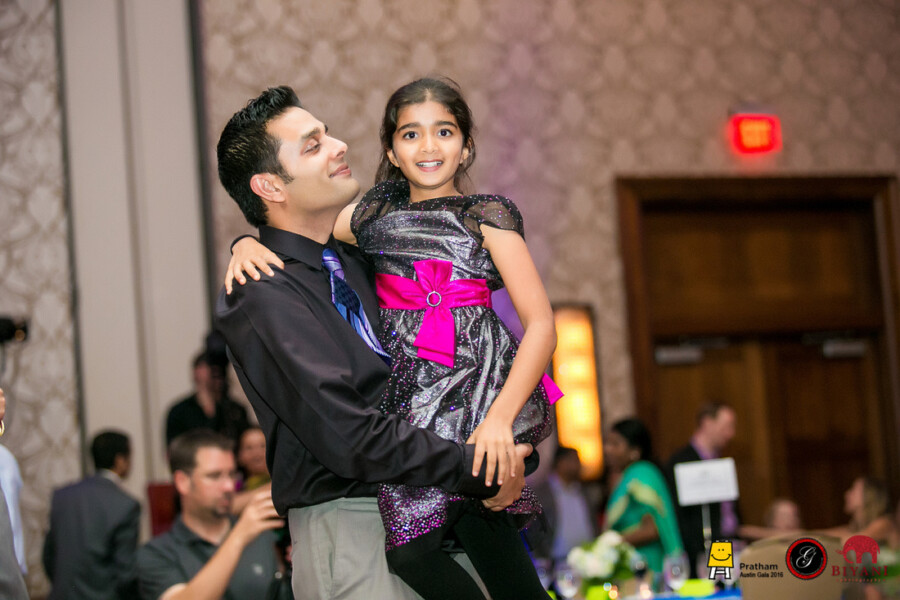 This year’s Pratham Austin Gala, held at the Hyatt Regency Hotel on September 17, was a resounding success, exceeding all expectations. Thanks to the generosity of event sponsors and the more than 500 individuals who attended the event, the gala raised over $230,000, a record for the Austin Chapter.

Following a cocktail reception featuring an impressive array of appetizers provided by local restaurants, guests settled in for an inspiring keynote speech delivered by Harvard Business School Professor Dr. Srikant Datar, who praised Pratham for its ability to make a significant impact at a low cost, and received a thunderous standing ovation.

The evening also honored local entrepreneur Sam Kumar for his work and contribution in furthering education efforts locally and in India.

Pratham Austin Co-president Isha Paul and co-founder Ashish Gupta led the pledge drive, each giving a passionate speech about their own experience with Pratham, emphasizing the magnitude of the problem while celebrating the 50,000 lives the chapter has helped transform. Special guests Raj and Aradhana Asava and National Readathon Chair Mamata Misra also gave moving accounts of the transformative learning programs they witnessed while visiting Pratham sites in India.

Much of the evening’s contributions came by way of a silent as well as a spirited live auction, which offered Pratham supporters a chance to bid on vacation packages, jewelry and a Nataraj (porcelain deity) made by Lladró, among other items. Perhaps the highlight was a colorful, gloriously detailed canvas collage painting titled “The Tree of Learning,” depicting a teacher leading an entire village in a reading lesson under a banyan tree, exclusively created and donated by New Delhi-based artist Sailesh Sanghvi, which fetched $12,000.

And although education and fundraising were the main points of focus, it wouldn’t have been an Austin gala without spectacular entertainment. Ten talented contestants treated listeners to their enchanting renditions of Bollywood hits as well as classical and folk favorites in a nail-biting Voice competition, with first prize being awarded to the father and daughter duo Kunjan and Sapna Bhatt for their mashup of Hindi and English songs.

The Pratham Austin Chapter gratefully acknowledges the gala committee – Minu Mohan, Isha Paul, Cheryl Fernandes, Nidhi Nakra, Vidya Garamella, Aditi Joshi, Monali Shah, and Kate Taylor. Special thanks to Cheryl Fernandes and the team from Glitzzy Events, emcees Deep Nasta and Sujata Camp, co-founders and former presidents Ashish Gupta and Vandana Kumar, volunteer groups from Pratham UT and Dell’s Asians in Motion and our distinguished and engaged Board Members, without whom the evening would not have been possible.

View photos or click on the video to watch the highlights from the gala.