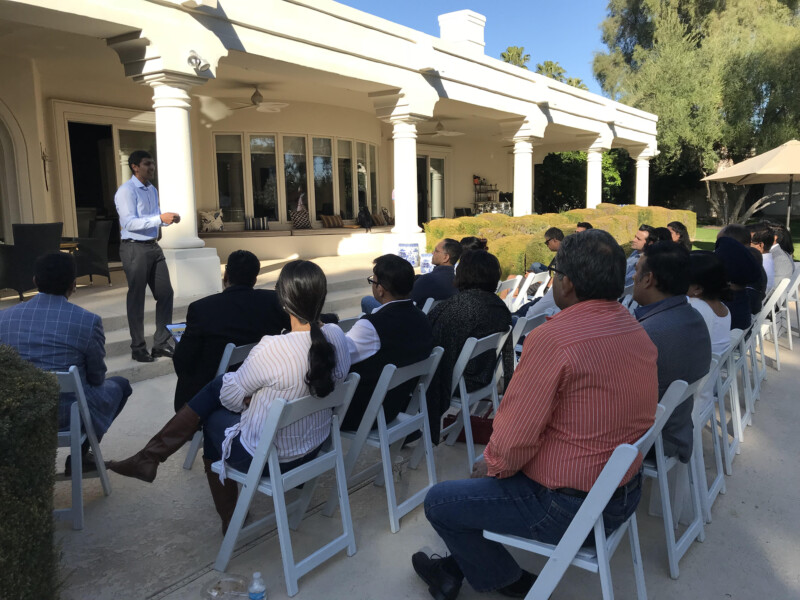 An informal get together was held for Pratham supporters on February 25 at the home of Samir Sawhney, who serves on the chapter advisory board, and his wife Nazila.

Attendees had an opportunity to meet Azeez Gupta, former director of Pratham’s vocational training program, as well as Vikas Bahl, a development director for Pratham USA.

Azeez gave a first-hand account of the program, which was in its infancy when he joined in 2014 and today trains 25,000 youth annually. He spoke passionately about the transformation he witnessed in the young men and women who completed the program: “Not only were they able to become earning members of society, but there was also a tremendous boost in their self-esteem.”

He also highlighted the qualities that set Pratham program apart such as its alumni support network, which assists graduates in settling in at their first job. “In addition to job training, youth are taught to navigate through the system, like making eye contact while speaking, negotiating a salary, etc. This helps to reduce the attrition rate.” Studies show that more than 75% of Pratham graduates retain their jobs beyond six months compared to the 40% retention rate of comparable vocational training providers.

Vikas gave an overview of Pratham USA, its activities and the important role supporters in the US play in the vital work that is undertaken in India. He also spoke about Pratham’s foray into digital learning and the PraDigi app aimed at supporting Pratham’s core literacy and learning programs, supported by the Sarva Mangal Family Trust and Google.org.

Chapter President Dr. Sheena Banerjee hopes to hold more informational lectures in the future to give supporters an opportunity to gain a deeper understanding of Pratham’s programs.

To learn more about events like this, join the Phoenix chapter.