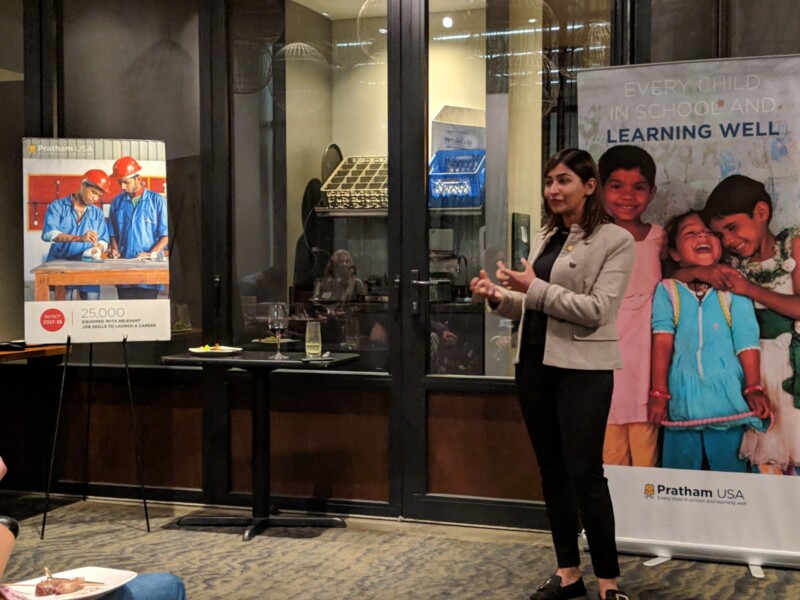 On March 24, Medha Uniyal, director of the Pratham’s vocational programs, and Smitin Brid, head of Pratham’s early childhood programs, visited Seattle to meet with local supporters and discuss their work. The two addressed a group of 20—ranging from long-time chapter members to newcomers—at the Wild Ginger restaurant in Bellevue, WA.

Medha opened the evening with a brief history of Pratham, highlighting what separates Pratham from other organizations: “For us, the overall objective is not to have people come to rural areas and just teach, but to empower the community to take the initiative of learning on their own.”

She recounted the origins and evolution of the vocational program, from initially imparting basic communication and digital literacy skills to currently offering training in six industries in partnership with various companies. “But it’s a Band-Aid solution,” she admitted. “You’re not solving the problem of education, but you’re solving the immediate problem of employment.”

Smitin began with a discussion of Pratham’s initial collaboration with governments to provide access to school for all children in India. Unfortunately, although the issue of enrollment was eventually solved—India now boasts a 97% enrollment rate—it was unclear to what extent children were actually learning. “Like many others in Pratham,” he explained, “I realized that the learning issue is a burning issue.” Smitin emphasized the inadequacies of the infrastructure, content and methodologies in India’s education system and Pratham’s work to overcome these obstacles in tribal and urban slum areas.

Attendee Tanya Puri-Sharma was enthusiastic, “This was a great event. I learned so much. I was very impressed with the vocational training program and how it’s exposing young adults to options where careers are concerned.”

If you would like to attend events in the future hosted by Pratham Seattle, please join our chapter.