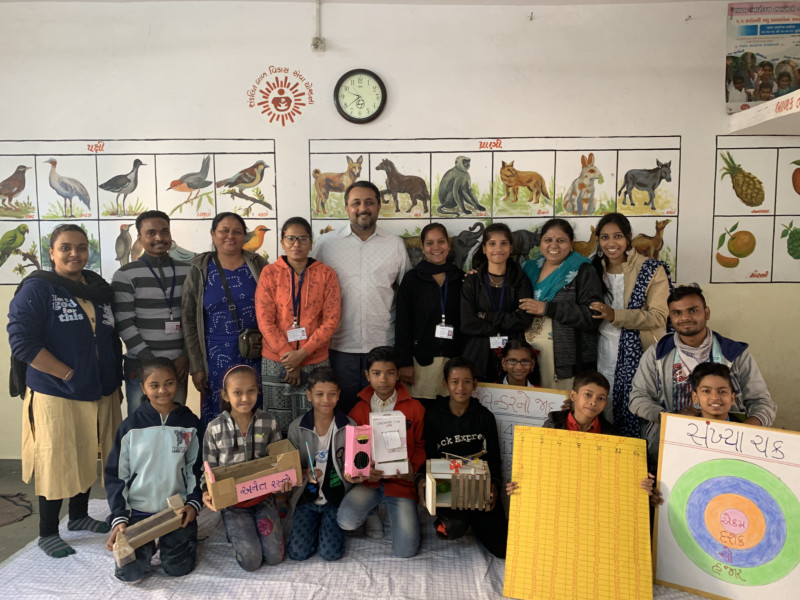 On January 27, 2019, Phoenix advisory board member Sanat Patel hosted a video conference for US supporters from a Pratham center near Vadodara, Gujarat. During the hour-long event, Sanat served as both moderator and interpreter between the participants in India and donors in Phoenix. The call—a creative way to connect US volunteers with program beneficiaries—offered many their first chance to interact directly with the children they are so dedicated to helping.

Sanat, along with his wife, Jagu, and his mother, Manju, decided to visit a Pratham center in India because they wanted to witness the programs in action. The virtual meeting was intended to offer fellow supporters back home a similar chance without having to make the journey themselves. The roughly 25 chapter members who participated in the call were amazed at the confidence with which the children expressed themselves and were moved by their motivation to become professionals, something they had never thought possible before Pratham’s intervention.

“The call was an opportunity for a lot of us to see a Pratham Science fair for the first time,” said Chapter President Sheena Banerjee. “I was very impressed by the innovative ideas that were put forth by the children. It could have been a science fair being held at any middle school in the USA.”

Sanat emphasized the value of his family’s visit to the site: “In Vadodara, we experienced firsthand the impact of the hard work of volunteers and teachers of Pratham in the confidence they build in the children.  This self-confidence, creativity and application of what they learn at Pratham into real-world solutions was further echoed by the principal of the school we visited who commented that she ‘sees how Pratham’s program teaches kids not only the basic skills of reading, writing, and math but opens the minds of these children to opportunity and secures the parents’ commitment to further educate them.”

Watch a clip from the call.