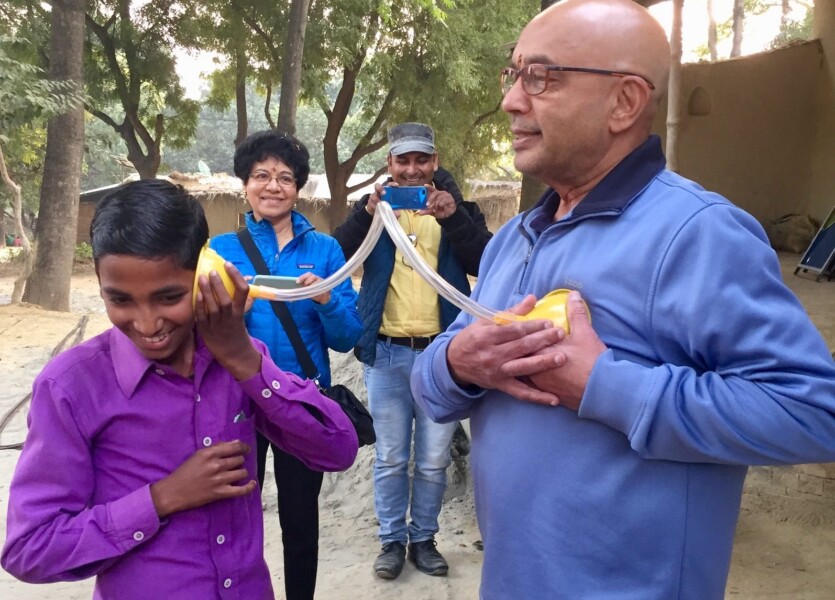 In December, Sapphira Goradia and her parents visited Pratham programs in Uttar Pradesh, India’s most populous state. The daughter of Pratham USA’s first family has taken the time to provide an insightful account of her experience, offering a fresh perspective from the next generation of Pratham supporters.

“It’s hard to recall a time in my life when I didn’t think about Pratham on at least a weekly basis. This is not an exaggeration—my father, Vijay Goradia, founded Pratham USA when I was 13 years old, and since then, our conversations as a family have often focused on Pratham—how the organization is growing, the successes and struggles of different programs, the fundraising efforts of the various chapters and the inspiring dedication of Pratham’s hundreds of volunteers. It has been nothing short of remarkable for me to see Pratham grow from a small preschool program in Mumbai to an international NGO that is measurably impacting the lives of millions of children in India and beyond.

In April of 2016, Dr. Madhav Chavan, co-founder and president of Pratham, told me about an idea he was working on to place tablets loaded with interactive educational modules in villages. His intention was to offer children access to high-quality content outside of a school setting, providing them the opportunity to work collaboratively, think critically, and improve their competencies across a variety of subjects.

Dr. Chavan and the Pratham team immediately set out to test and refine this idea, and in August of 2017 launched PraDigi. Less than two years since the launch, 18000 tablets have been distributed across 21 states with content in 11 regional languages.

This past December, we were fortunate to get to see PraDigi in action in a village outside Sitapur, in Uttar Pradesh. When we walked into the village, we immediately saw two circles—one made up of four- to six-year-olds, and one of children from around eight to twelve years old. Both groups were so fixated on what they were doing that they didn’t even raise their heads when we, a group of strangers, walked up. Each group was staring at a PraDigi tablet, excitedly working through a module.

When we introduced ourselves and asked what the children were working on, the older group began showing us their science experiments, objects they had built from scratch using what they had found in the village. We tried out a homemade stethoscope, used a thermos that was keeping tea warm with foil as insulation, and learned how sound is transmitted from a ten-year-old who showed us the makeshift telephone he had built. What I can’t accurately reflect in words is how eager these children were to show us what they had made, and more importantly, to explain to us the science behind how each creation worked.

We came away from this visit truly impressed by the enthusiasm that each of these children displayed towards learning—they were engaged with the tablets and with one another, and were successfully directing their own learning with the support of the content on the tablets.

Of course, seeing the excitement on the faces of these children is inspiring, but we need to know if their learning outcomes are actually improving—which is why in order for a group of children to move on to new content using PraDigi, they have to answer questions or perform activities demonstrating what they have grasped in the content module they’ve completed. Pratham is also measuring the engagement and motivation of the children through usage data, thereby gaining a better understanding of the students’ choices and creating a mechanism that makes learning available to anyone, anywhere, and at anytime.

Over the past 20 years, Pratham’s leadership has set ambitious goals in terms of the number of children they want to reach through the NGO’s innovative educational models. PraDigi is the most recent example of an innovative tool that is tested, measured, and improved upon by Pratham to result in the most effective learning outcomes possible.”

Sapphira Goradia is the Executive Director of the Vijay and Marie Goradia Foundation, where she leads the Foundation’s efforts to improve health and educational outcomes in India through the support of innovative, measurable and scalable initiatives.