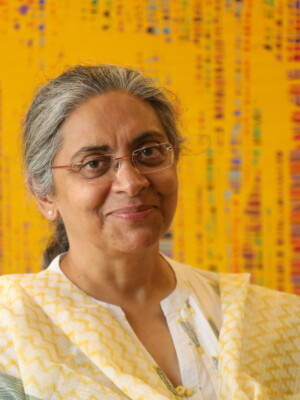 Rukmini Banerji was trained as an economist at St. Stephen’s College (Delhi) and the Delhi School of Economics. She was a Rhodes Scholar at Oxford University (1981-83) and completed her PhD at the University of Chicago in 1991. Rukmini returned to India in 1996 and joined Pratham. Over the years, she has worked extensively in Pratham’s education programs in rural and urban areas. Along with her teams, she has played a major role in designing and supporting large scale partnerships with state governments in India, for improving children’s learning outcomes. Rukmini led Pratham’s research and assessment efforts including the Annual Status of Education Report (ASER) exercise from 2005 to 2014. Since 2015, she has been the CEO of Pratham.

In 2008, Rukmini received the Maulana Abul Kalam Shiksha Puraskar by the Government of Bihar, India. She was the first recipient of this award. In 2021, Rukmini was awarded the Yidan Prize for Education Development.

Originally from Bihar, she is now based between New Delhi and Pune. Rukmini writes frequently on education in both Hindi and English dailies in India and enjoys writing books and stories for children.

“How Do Systems Respond to Disruptive Pedagogic Innovations? The Case of Pratham in Bihar,” in RISE Working Paper Series. RISE-WP-15/002, October 2015. View article.

Rukmini’s talk on the topic of “parents and play” at the 2019 LEGO® Idea Conference, which brought together 300+ thought leaders, experts, social innovators, and practitioners to explore how caregivers can support children in their development.